Isn’t it great if you can turn your getting stuck situation upside-down to have a revolved perspective? Similar are the effects of the headstand which is an advanced yoga inversion pose.

The restorative benefits of the headstand to the nervous system makes it the most valuable practice in yoga. Yogis often refer to it as the King of all asanas because it boosts the brain’s capacity, i.e. as effective to a body as a king to its empire.

Headstand is a challenging hatha yoga asana where the body is inverted and balanced on the head and forearms. Here, the head lies below the heart, i.e. opposite of the usual body posture or any standing asana like tadasana.

Besides balance, strength, and alignment, pleasure is an indispensable element to perform Headstand providing soothing effects. Go on further to find out its benefits, variations, and practice tips.

In Sanskrit, Headstand is known as Sirsasana composed of the following root terms:

It is assumed by standing on the crown of the head while legs are lifted against the gravity, hence the name.

The inversion of the body to hold sirsasana inverts and modifies the flow and pressure of the blood. In response to a change in the blood circulation, the body reacts by bringing balance in different body systems.

Headstand is all about bringing relaxation, gentleness, and playfulness. Thus, the headstand pose provides grounding effects and improves the physiology of the practitioner.

Relax your body and give it time to regain the normal blood flow. You can lean slightly backward opening the chest and bringing the palms on the back of the mat with fingers pointing forward.

Then relax in Child’s pose followed by corpse pose (shavasana).

There are many health risks associated with the headstand performed incorrectly. Therefore keep the following points in mind before and while getting into it:

In this variation the head is not cupped on the inside of the hands.

In this variation, the entire body weight is balanced by the head without the support of the arms, hence the name.

The inversion in the body supplies the blood towards the head and changes the flow and pressure. It improves the heart functioning with the head and eyes receiving enough blood supply.

Headstand pose improves the posture of the spine and strengthens the back muscles. It improves spinal flexibility and realigns the vertebral column.

This yogic posture uses the core muscles to uplift the legs against gravity and these muscles remain engaged throughout the practice. This helps in strengthening the core and enhancing endurance.

While performing the headstand the pituitary gland (master gland) is activated. Hence all the other glands are also stimulated maintaining the hormonal flow within the body.

Due to the inverted position of the body, the abdominal organs pressurize the diaphragm. It increases the exhalation rate thus removing carbon dioxide and purifying the lungs. The removal of toxins from the lungs makes them efficient.

Headstand is a challenging pose but life is all about overcoming your fears and facing them head-on.

Trying this posture will serve as a perfect beginning to conquer the obstacles. Besides this, it works on improving all four cardiovascular, lymphatic, nervous, and endocrine systems. 2

If you are a beginner try the basic headstand pose today with proper safety and maintaining fun. Even the experienced practitioner can use the above practice guide to try the variations and get immense health benefits. 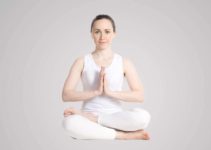