Fibromyalgia doesn’t only seem like a complicated tongue-twister but is an even more complicated painful syndrome. The worst thing about it is, the symptoms of this disorder are not limited to pain but range quite widely. Luckily, certain yoga poses for treating fibromyalgia are there to make your way through it.

Let’s begin with understanding what it is all about, its symptoms, and the cures that yoga can provide. Continue scrolling down to find out further.

Fibromyalgia aka fibromyalgia syndrome is a painful condition that causes excruciating musculoskeletal pain all over the body. The pain is similar to arthritis, but the only difference is that it doesn’t harm the muscles and joints.

Anyone can get affected by this disorder, however, women aged between 40-75 years are more prone to get fibromyalgia. It has been reported that about 9 out of 10 patients of fibromyalgia are women. 1

The reason or origin behind this painful condition is not clear yet, however, some sources mention that an imbalance in the neurotransmitters could be a major trigger. The brain misinterprets normal pain signals and heightens them to extremity.

People who are already under chronic stress or suffering from Traumatic Stress Disorder (PTSD) often become victims of fibromyalgia. Besides this, certain conditions like changing weather, hormonal changes during pregnancy, menstruation, or lack of physical exercise often increases the chance of getting fibromyalgia.

People suffering from fibromyalgia complain pain in certain tender points in the body which are better known as “trigger points”. There are total of 18 trigger points including the knees, outer elbows, top of the shoulders, hips, back of the head, and upper neck. These points when experience mild pressure leads to gut-wrenching pain.

Apart from pain, the symptoms of fibromyalgia vary widely as it includes the following:

Recent researches have proved that yoga helps as a pain-relieving practice for the patients of fibromyalgia by alleviating its major symptoms. Some of the studies that you can rely upon are mentioned below:

With the above-mentioned research studies, yoga is found to be an effective aid in treating fibromyalgia by soothing the nervous system. As any emotional trauma is suffice to trigger or worsen fibromyalgia pain.

The yoga stretches also promotes strength and flexibility in the muscles by improving blood circulation. It provides required nourishment and oxygen to muscles, eventually relieving muscle cramps and stiffness.

Yoga poses strengthening and stretching the muscles to get rid of fibromyalgia and overcoming its symptoms are documented over here.

People already suffering from a rheumatoid issue, stress, or obesity are at greater risk of this painful syndrome. Hence, let’s find out how exactly yoga helps relieve it.

Warrior I is a wide-legged standing posture involving elements of slight backbend along with rotating the torso towards one leg. This is followed by raising the arms overhead and bending the front knee.

Practicing Warrior I strengthens and stretches the back, arm, and leg muscles. The flexibility of these muscles improves and it eliminates muscle cramps. Also, it improves body balance, stamina, and concentration, thus, benefits patients with fibromyalgia.

Legs up the wall is practised lying on the back and extending the legs up against the wall. It is followed by walking the heels up to raise the hips and back off the floor.

This mild inversion improves blood circulation and calms down the nervous system. It also helps in getting rid of insomnia, thus, benefits fibromyalgia patients.

Cobra pose is a gentle backbend practised lying on the belly with hands beside pressed against the floor to lift the head, chest, and abdomen.

It stretches the front of the torso, opens the chest, and abdominal muscles. This leads to strengthening the back, improving the blood circulation around the arms, and shoulders, relieving fatigue.

It is a seated posture where the soles of feet are joined and heels are pulled towards the pelvis maintaining the back integrity.

The knees are bent and stretched while holding this pose and the hips open as well, hence any stiffness is relieved trapped within the muscles. Thus, it is also practised as of the effective yoga poses in treating fibromyalgia.

It is practised lying on the back and lifting the hips and back off the floor while keeping the feet, arms, and shoulders on the floor.

Bridge pose is one of energizing yet calming yoga poses for treating fibromyalgia because it soothes the trigger points on the back by strengthening spinal muscles. Also, in this pose, the head lies below the heart that rushes blood to the nerves, relieving stress, and eliminating fatigue.

It is assumed by sitting with folded legs keeping the upper part of the feet towards the floor and lowering the hips over the heels. From here, the torso is lengthened by walking the palms forward until the forehead rests on the floor.

This relaxes the entire body especially the mind by improving blood circulation and deep breaths allow the brain to function efficiently. Plus, relaxing in this pose, subtly stretches the arms, shoulders, back and hips that soothes the major trigger points among fibromyalgia patients.

To practice this pose the feet are placed firmly on the floor and the torso is bent forward bringing the head into an inversion touching the shins.

It is a great stretch for the back, arms, and legs. It promotes circulation, relieves anxiety, stretches and strengthens back muscles. These effects make it a good yoga pose for fibromyalgia.

This is a foundational standing posture where the body weight is symmetrically distributed around the four corners of the feet. From there, the heels are lifted and arms are raised overhead balancing the body on toes keeping the core engaged.

It is a gentle stretch as well as a mindful yoga pose that draws the concentration completely over the body alignment and balance. It relaxes the mind and also helps in getting rid of sleeplessness.

Cat-cow, as the name suggest involves two complementary stretches that arches and rounds the back from a tabletop position.

It engages the entire body while stretching and strengthens the muscles deeply. The blood circulation around the spine, arms, legs, and abdominals improves. It opens the chest, relaxes the shoulders, and relieves fibromyalgia pain around tender points.

Corpse pose is about lying down on the back easing all the muscular tension and diving in to reach the relaxed higher meditative states.

This is a restorative posture for ending the yoga session, especially among fibromyalgia patients as it rejuvenates the body and eliminates fatigue. Also, the brain calms down with this practice which comes in handy and makes it one of the effective poses for treating fibromyalgia.

Practicing these yoga poses for treating fibromyalgia is an effective, safe, and inexpensive approach. It energizing and meditative effects brings both stamina as well as mindfulness that works on alleviating symptoms of fibromyalgia.

Try to leave all your worries behind the mat to experience the pain-free and energizing effects of yoga on your condition. Dedicate some hours for your practice every day and observe the wonders that it leaves on you. 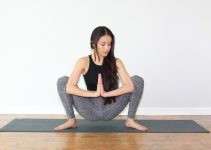 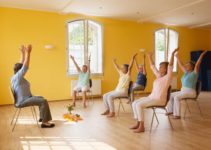 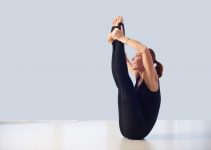