Makarasana is deep relaxation restorative pose. It is one of the best poses for setting a state of tranquility in the mind that generally performed at the end of a rigorous yoga session.

The primary aim of Makarasana is to relieve any strain that may come during the physical asana practice.

In Makarasana our body lies in opposite to Savasana i.e. face down with the hands folded under the head. This elevated face and neck resemble a crocodile resting on the surface of the water.

Makara is a Sanskrit term that means ‘Crocodile’ and ‘Asana‘ means ‘Pose’. Makarasana is the pose of ‘Crocodile’ also called ‘Silent hunters’. The way the crocodile remains calm on the surface of the water as well as scanning all the activities around it, practicing Makarasana does the same. It makes the person calm and silent to observe things with greater attention.

Lie on the ground, face downward, the chest touching the earth, the two legs being stretched: Catch the head with two arms. This is called Makarasana, the increaser of bodily heat.

By following points below, one can practice Makarasana easy and safe.

The Makarasana enriched a practitioner with peace and relaxation so, performing it in between the two yoga asanas for 3 to 5 minutes is very refreshing.

If it is to be performed at the end of the yoga session then a minimum of 10 minutes should be given. In the case of individual practice of this asana, one should remain at least 15 to 20 minutes in Makarasana.

In his book Light on Yoga, BKS Iyengar has described Makarasana as a variation of Salabhasana (Locust Pose). In Makarasana Iyengar variation: 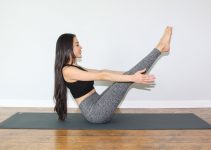 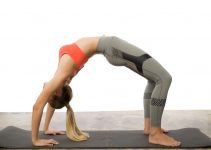