Bhairavasana is an advanced variation of Vasisthasana which intensely opens the hips while balancing the body on one hand and leg on the floor. It is a pose in the third series of Ashtanga yoga.

This pose involves side-bending and twisting of the torso stretching the arms, core, hamstrings, legs, and hips. Along with opening the hips, it opens a gateway towards immense strength and mental calmness.

Bhairavasana has been named after Lord Shiva’s fierce incarnation, known as Bhairav, who is associated with annihilation. Bhairav is known to destroy everything evil in nature, similarly, it eliminates all the negative forces like illusions, fears, ignorance, ego, attachment, bad habits, and everything that hinders true happiness.

Due to the annihilation principles of Bhairav, he is known as the destroyer of the Universe for enabling new creations. Hence, this pose is translated as Destroyer Of The Universe Pose. In Iyengar Yoga, it is referred to as Kala Bhairavasana.

There is a mythological tale behind the interpretation of this pose, which depicts a conversation between Lord Brahma and Vishnu. It goes something like that:

Once Lord Vishnu asked Brahma, “who is the greatest creator in this Universe.?” To which Brahma boldly replied, “it’s me of course, I have myself created this whole universe.” Brahma started thinking more and more about and his ego took over, as he started taking him as the supreme one.

It did not stop there, he had started interfering in Shiva’s duties and took over some of his charges too. This lead Shiva to Brahma’s newly developed pride about he being the supreme God and must be worshipped over as the almighty. This made Shiva angry and he decided to bring Brahma back to reality.

Shiva took his little fingernail and flicked it, from that his annihilation-related incarnation, Bhairav came into being. He found Brahma and chopped one of his five heads as a lesson. That’s why Brahma is depicted with only four heads now. To this, Brahma came to realize his arrogance, ego, and unnecessary pride and also bowed down to Shiva.

This explain the position of the leg behind the head while assuming Bhairavasana. It imitates that you are trying to behead yourself to not let the negative feelings get control over your mind and keeps the ego at bay.

This challenging pose demands certain precautionary measures and a lot of preliminary practices. Follow the given guidelines to assume bhairavasana with ease.

How to Do Bhairavasana (Steps)

Here’s the demonstration of Bhairavasana in a vinyasa flow.

There is one advanced level variation to this pose where the body undergoes similar moves but in a reclining position. It is better described below:

Bhairavasana is known to provide some therapeutic benefits as well. Let’s find out who can get its remedial effects in this section:

Bhairavasana provides several health benefits that flourish not only the body but also the mind. People need to try this must-do pose and get the following advantages out of it:

Practicing Bhairavasana lengthens the spine which stretches the back muscles and makes them supple and flexible. The spine gets strong and prevents any chances of getting hurt or injured.

It involves flexing the knees, ankles, while activating the arches and toes. It stretches the leg muscles and supplies blood and nourishment to the cells. Thus, promotes legs strength and flexibility.

Since, bhairavasana is an intense hip opener, it stretches the hip-flexors, and the internal rotation of the hips while performing the pose focuses on hip flexors. It improves the hip mobility and relieves all the accumulated stress.

To get into this pose, the torso is bent sideways that brings a great stretch in oblique muscles. It increases the endurance of these muscles, keeps the body toned and in proper shape.

Holding Bhairavasana brings a sense of surrender and acceptance. By bringing the sense of acceptance, it saves one from jealousy, anger, and frustration. Hence, it gives a chance to relieve the stress and fatigue, calms the mind, and brings internal peace.

Even after keeping the several physical benefits aside, the psychological benefits makes Bhairavasana as must to-do pose.

DON’T MISS OUT!
Subscribe To Our Newsletter
Nurture youself with ancient wisdom of yoga and meditation related topics.
Give it a try, you can unsubscribe anytime.
Powered by Convert Plus
Tags:balancing pose, supine pose 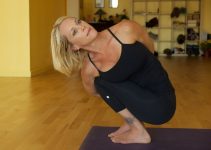 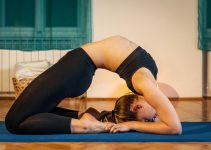 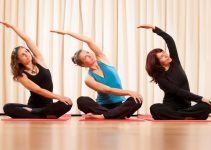